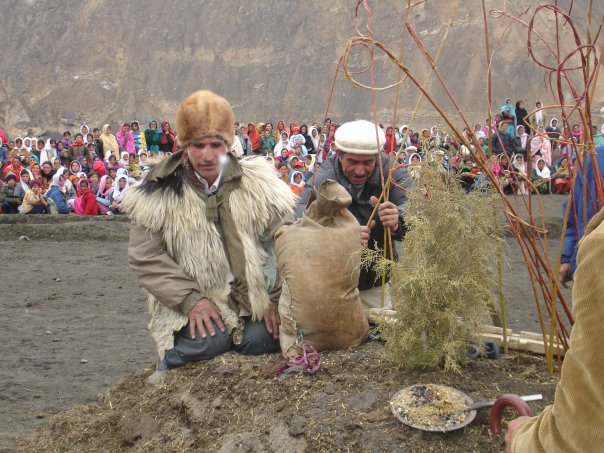 Shimshal Valley celebrated Taghm festival today, marking the start of the spring (agriculture) season in the village after several months of the bone-chilling winter. Shimshal is situated in Gojal Valley, Hunza, Gilgit-Baltistan.

The people of Shimshal Valley in particular, and those of Gojal Valley in general, have perfectly preserved the Taghm festival for centuries now. In Shimshal, Taghm is celebrated with zeal and zest on the first day of April every year. People of the valley will now formally start farming, including irrigation of agricultural lands.

The Taghm festival starts with the preparation of a local cuisine called “Semn” in a cooking procedure dubbed in the Wakhi language as “Pirkiten.” Other traditional foods prepared during the festival include “Mul” and “Bath.”

The most interesting and exciting part of the Taghm festival is the Tumang, during which members of the “Shogun Putuk” (initiators) tribe officially announce start of the cultivation season by setting fire to leaves of a plant called “Yarz” and by throwing wheat seeds on the roof of an old house from inside the house through an opening in the ceiling called “Ricin” in Wakhi language. The next big thing in the Taghm festival is a game that features a man attired and acting like a bull. He entertains the audience by performing different playful acts.

After the game, the start of farming season is demonstrated with the Shogun Putuks ploughing the field in a traditional way (with the help of bulls), and small children being introduced to farming in a process called “Sk Spunder Khack.” The festivalgoers then eat the dishes prepared and brought in one place from across the village.

Besides arranging mountain adventures, Karakorum Expeditions organizes cultural tours across Pakistan, including Gilgit-Baltistan and Chitral. If you want to have a firsthand experience of the cultural heritage of Pakistan, get in touch with us now.

This error message is only visible to WordPress admins

Make sure this account has posts available on instagram.com.